Indigenous Peoples: Their Survival is Our Survival 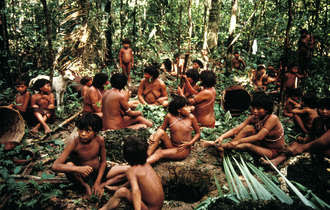 Discrimination?
We are systemically excluded from means of gaining political and economic power.
Poverty?
We are chronically over-represented among the poor in health and in education.
Genocide?
We are ruthlessly annihilated by predators entirely foreign to us:
drugs, alcohol, domestic violence, sexual abuse, and suicide.

We have been raped, robbed, and murdered in the name of economic development.
We are veteran refugees, persecuted even as we pursue voluntary isolation.
We are the indigenous peoples of the world.

Earlier this month, the United Nations (UN) released its very first report on the State of the World’s Indigenous Peoples. And the state of indigenous peoples the world over is grim indeed. Sobering statistics from UNESCO cite that up to ninety (90) percent of the 7,000 languages currently spoken are likely to become extinct or threatened by the end of the century; of these 7,000 languages, more than 4,000 belong to indigenous peoples. Among peoples where oral traditions are vital to maintaining traditional knowledge, lingual extinction amounts to cultural extinction.

The intrinsic value of cultural diversity aside, TK is becoming increasingly recognized for its role in harnessing biodiversity and spurring innovation.[1] Eighty (80) percent of current medical compounds are used for identical or nearly identical ethnomedical purposes as the medical plants from which they were derived (Fabricant & Farnsworth, 2001). Richard Evans Schultes, widely regarded as the father of ethnobotany, foretold this marvel more than twenty years ago:

“The accomplishments of aboriginal people in learning plant properties must be a result of a long and intimate association with, and utter dependence on, their ambient vegetationl This native knowledge warrants careful and critical attention on the part of modern scientific efforts. […] If phytochemists must randomly investigate the constituents of biological effects of 80,000 species of Amazon plants, the task may never be finished. Concentrating first on those species that people have lived and experimented with for millennia offers a short-cut to the discovery of new medically or industrially useful compounds” (Schultes, 1988).

In fact, the International Union for Conservation of Nature approximates the value of biologically diverse resources from countries in the Southern Hemisphere used to supply demands of Northern pharmaceutical companies at US $32 billion per annum (IUCN, 2002). The TK of indigenous peoples is an indisputably essential catalyst for innovation.

TK also acts as symbiotic guardian of the world’s most biologically diverse resources. The singular relationship between preservation of biodiversity and stimulation of development is acknowledged by the UN in its designation of 2010 as the Year of Biodiversity. In its Declaration on the Rights of Indigenous Peoples, the UN affirms that “respect for indigenous knowledge, cultures, and traditional practices contributes to sustainable and equitable development and proper management of the environment.” This is not only due to the fact that indigenous peoples are custodians of a vast store of environmental knowledge. Indigenous peoples also serve as barometers of global climate change as they make measurable changes to their lifestyles according to measurable changes in their environments (Arctic Climate Impact Assessment, 2005). 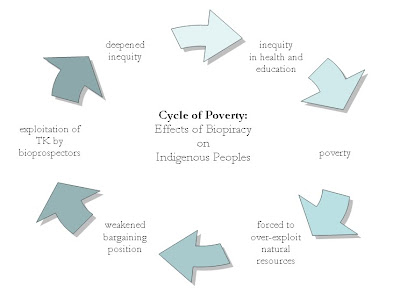 In attempting to break the cycle diagrammed above, international legal mechanisms have largely focused on methods of combating and preventing biopiracy, the misappropriation of indigenous resources—knowledge, genetic samples, even likenesses—without free and prior informed consent (FPIC) and/or just compensation.

The intellectual property (IP) approach is the dominant mechanism for establishing ownership rights over knowledge and cultural expressions. To be effective, it must not only balance the interests of indigenous peoples involved with bioprospectors; it must mediate between (a) the sovereign rights of nationals to regulate access to genetic resources and (b) the IP rights of indigenous communities (Iwu, 1996). An example of this binary is one of the chief international legal instruments concerning indigenous IP, the Convention on Biological Diversity (CBD). Recognizing the “close and traditional dependence of individual and local communities” on biodiversity, the CBD nevertheless squarely places ownership of genetic resources with national governments—despite the fact that knowledge of use of biogenetic resources belongs to individuals and communities.

The IP regime is the default model for protection of TK because insufficient protections of creations make for lessened incentives to disseminate said creations and, therefore, fewer opportunities for the public to benefit from them. Thus is the nature of the IP system: it privatizes common property, including TK and other manifestations of cultural heritage. This, critics argue, is precisely why the IP model is ill-suited for indigenous peoples. More stringent protections lead to higher costs of development of goods (e.g. pharmaceutical drugs), thereby withholding benefits from the very countries who need them most: the poor and the remote (World Bank, 2000/2001).

More to the point, it is argued that the Western origins of the IP regime make it inherently incompatible with the indigenous question. IP mechanisms protect individuals for a limited duration, and only after proven novelty, industrial applicability, and capacity for reproduction of results. They are also expensive—often prohibitively so (ASEAN Workshop, 2001). In contrast, TK consists of intangible cultural products and expressions which are held collectively, acquired informally, and transmitted generationally. (Even if a product of TK were to possess an element of novelty, the level of product disclosure required for nearly all IP mechanisms would eliminate said novelty and therefore eliminate its patentability [World Intellectual Property Organization, 2005].)

As a result, many in the indigenous rights movement have advocated a human rights (HR) approach. HR instruments are not legally binding without state ratification, and they therefore lack penalization mechanisms against states who shirk their obligations to said instruments.

The HR approach is problematic in that it, too, is not entirely appropriate for the indigenous movement. Modern HR paradigms are grounded in 18th century liberal individualism, where every person possesses “natural rights” which are due to the “inherent dignity of the individual” as separate from a society, especially the state (Howard & Donelly, 1986). This theoretical perspective anticipates conflict between the individual and his or her community and reacts accordingly, fearing above all that communal rights will override rights of single members or of outsiders. Consequently, the individualism embedded within the HR approach renders it somewhat unsuitable for group-oriented non-Western societies.

There is a third way. The “Traditional Resource Rights” approach attempts to conceptualize IP as a universal HR, rather than as an economic means to achieve well-being. Hence, the TRR approach has the potential to both insert the indigenous HR movement more firmly into IP law and to widen the scope of international HR instruments to include IP mechanisms.

Whether by way of intellectual property mechanisms or human rights instruments, it is imperative that the international community identifies, implements, and enforces legal systems to safeguard the traditional knowledge of the world’s indigenous peoples.

This is because traditional knowledge cultivates and is cultivated by biological and cultural diversity. Thus, by preserving the environment and heritage of indigenous peoples, the global community can take advantage of innovative opportunities for responsible development.

Ours is a planet besieged by famine, war, inequity, disease, and—in the wake of Haiti’s great grief—epic disasters. We must prioritize the survival of Earth’s indigenous peoples, for our futures are inextricable intertwined. In the end, ensuring their survival will mean ensuring the survival of our world.

[1] Indigenous experts are wary to define TK for fear of diminishing the breadth of the term’s legal applicability; however, the Convention on Biological Diversity (CBD) defines TK as “that body of knowledge built up through generations by a group of people living in close proximity to nature and manifested by practices in which tradition filters human innovation.”

*C. Joy Sheng is a guest contributing editor. She is an international liason for UFAM, specializing in indigenous rights advocacy. For factual corrections or copyright inquiries, please email ncpamz@gmail.com with the pertinent blog entry title in the subject line. 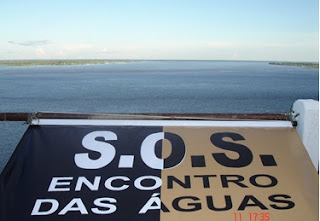 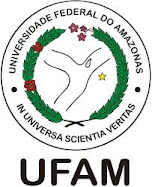